FREE SHIPPING AUSTRALIA WIDE ON ALL ORDERS OVER $100 aud 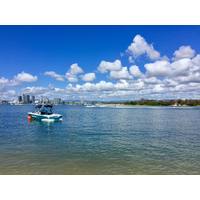 Hosted this year by Wakeboard Queensland, they put on a Nationals to remember.
Set at Marine Stadium, Gold Coast, the Mastercraft boats were right at home amongst the crystal clear water.
Strong riding from over 100 competitors who traveled from far and wide ended up seeing new National champions crowned.
Kicking off with the Under 9's, an array of riding went down, but stand out was Cooper Armstrong from South Australia, with a stand up pass including 2 inverts, which saw him walk away National Champion.
10-14 Boys was hotly contested with a mixed bag of inverts, spins and tech tricks being thrown down. Haydn Bru from Qld took the title home for 2017.
There was a strong presence of young ladies who took to the water over the 4 days.
Seeing such a strong contingent of ladies riding, with the youngest at 6 years old, shows that women's wakeboarding is still growing and positively growing for the future.
There was clear dominance from states in certain divisions. An all Queensland U9 Girls podium, an all Vic podium in 10-14 Girls, and all Qld podium in Junior Women and a mixed podium for Pro Women. Some stand out riding from the likes of Amber Henderson, Darcy Plumridge,  Georgia Sellings and Zahra Kell saw them all walk away 2017 National Champions.
It was a battle for the remaining divisions with some riders taking falls and missing the opportunity to complete passes, then others standing up and making it a tough job for the judges.
Remaining National Title winners included; Kev Watt, Andy Bennett, Jesse Scott, Josh Swift and in the Pro Men's Division - Nic Rapa.
Special Mention must be made to Ian Hickmott and Nathan Smith. Two extremely inspiring young men who competed in the Adaptive Division. Both wheelchair bound, Ian and Nathan took to the water and proved that no matter what happens in life, you are only ever restricted by your own boundaries. Anything is possible.
A fun and successful Wakeboard Nationals, with another year to work on tricks, have some fun and hopefully not wait another 12 months to catch up with all your new mates!!
Daniella Lambert

Select Afterpay as your payment method

Use your existing debit or credit card

Complete your checkout in seconds

All your need is:

1) An Australian Visa or Mastercard debit/credit card; 2) To be over 18 years of age; 3) To live in Australia